What do you do when you can only spend two half days in Edinburgh? It is not much time. That’s why we only looked at the highlights in this tightly timed window. However, I am convinced that we only scratched the surface here.

These are our highlights of Edinburgh.

Comfortably and for a first overview one can explore Edinburgh by the bus. Wherever you like, just get out and take a look at the area, the museum or the sights. After seeing the location you can continue by taking the next bus to the next stop.

Hardly to miss as majestic it stands – Edinburgh Castle. In the middle of the city, you can reach this in a leisurely walk through the picturesque streets.

On your way, there are many shops and restaurants. We noticed the Castle Terrace, because many citizens sit here, talking and sipping an ale. It’s a typical student mood, self-service, and a good mood. The view from the terrace of the city is wonderful in summer.

The early bird catches the worm. I went up very early to catch this atmosphere into a picture.

Very early we arrived in the Princess Garden and took pictures there in the morning sun. Also the view up to the castle is worthwhile.

Once a marketplace for livestock and horse trade this square is nowadays one of the centers of Edinburgh.

In the past, it was also a place of execution and there are many scary stories about the place. Like Maggie Dickson, who was hanged, but survived the ordeal. She was allowed to stay alive. But since then the verdict has been changed into – „until death occurs“.

In 1784, the last part of public consumption ended with James Andrews.

The Grass Market was a slum until the late 19th century. It was around 1912 that the first missions and workers‘ apartments have been built here.

The district is a popular meeting point for tourists and students with its marketplace and historic buildings along the same named street, mainly because of its many small shops, restaurants, and pubs.

Bobby, the faithful dog of the late police officer Jon Gray is one of the legends of the city. Allegedly, the dog stayed, still after his death at the grave in the cemetery of the Greyfriars Kirk in the old town of Edinburgh. One says, he left it only for his meals, in a nearby cafe.

Anyone who rubs his nose is lucky, they say. That is why it is so bright. Every year gets fresh colored again, but as you can see – it does not last long.

5The old University of Edinburgh

Until today, the Faculty of Medicine has a good name and the old building, in which only the first and second-semester are still studying is worth a walk.

But also scary legends are reported on the old faculty. The Irish migrant workers William Burke and William Hare are said to have driven their mischief here. For the faculty, it always needed fresh corpses, where the students could learn to dissect. They didn’t ask where the bodies came from and the reward was good. 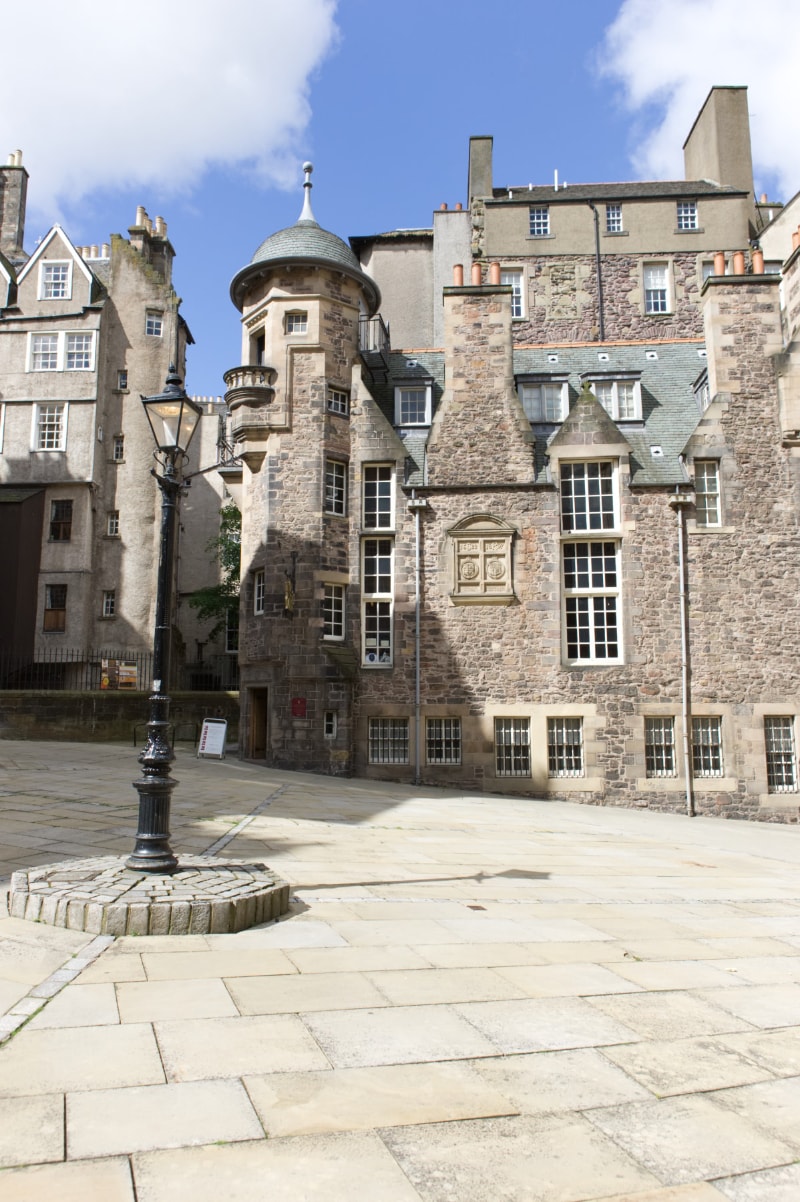 The Writer Museum stands for the three giants of Scottish literature. Robert Burns, Sir Walter Scott and Robert Louis Stevenson. The museum houses her portraits, rare books and many personal belongings of the writers.

The museum offers a wide selection of stories and objects for every age, making it ideal for children.

The original and historical part of Edinburgh is situated behind the defense fortress and was built on volcanic soil. So the famous Arthur’s Seat is nothing more than a tip of an extinct volcano. From here it runs the Royal Mile, with its many shops and pubs.

Many beautiful statues can be admired here.

The name of this district comes from the castle of Canongate, the order of David I of Scotland built about 1413. The castle got its name because it was along the road of the guns that have been pulled from Holyrood Abby.

9The Scottish Parliament and the Queens Gallery

You can discover the history of the royals here.

2002, Queen Elisabeth opened the Royal Museum. There are a lot of varied exhibitions and also a part of the Royal Exhibition. Attention – there are tickets available that also apply to Holyrood Palace. I can highly recommend you to buy this double entrance. You really can save money.

Holyrood Park (also known as Queen’s Park or King’s Park ) is a royal park in the center. It is open to the public. It has a number of hills, lochs , glens , ridges , basalt cliffs A piece of Highland landscape in the middle of the city. The park is linked to the royal palace of Holyroodhouse and used to be used as a royal hunting lodge from the 12th century.

A visit to Dynamic Earth is especially worthwhile for families with children. There you can immerse yourself in the prehistory of the planet and make virtual expeditions around the globe. A great destination for a rainy day in Edinburgh.

Edinburgh’s Art District. Here are the big galleries, like the Scottish National Gallery or the Scottish Gallery of Modern Art at home. The most popular is the

13Guinness, Ale’s and life-music at the Haymarket

In the Thomsons Pub I had my first Guinness and enjoyed the very good live music and the pub with its decor in particular. Here you feel good and besides Guinness, there are some good ales and whiskeys.

Read more articles and our reports about our trip through Scotland here: